The idea behind this group exhibition is for it to serve as a tribute to the founder and architect of Photosynkyria, Aris Georgiou (on the 30th anniversary of the ﬁrst organisation in 1988), whose actions led to the donation of the majority of the works presented here to the Macedonian Museum of Contemporary Art. At the same time, the exhibition attempts to recognise the important contribution of the MMCA, and its consistently vital cooperation with Photosynkyria and now with the Photobiennale, as well as that of the 26 Greek and foreign photographers-artists, most of them represented here with their works from various exhibitions of Photosynkyria. The time frame into which the majority of the works falls (late 70s – late 90s) points to another important feature; they either come from the age of analogue photography, from the early days of the intangible digital image which prevails today, or from the period in-between.

Niko J. Kallianiotis’ America in a Trance constitutes somewhat of a surprise as it follows in the tradition of street photography, a photographic genre that has long been receding. This is essentially a trip through the back roads of Pennsylvania, a glimpse into America’s ﬂipside whose social fabric is being drastically ruptured by the postindustrialist, globalised economy. His gaze captures empty storefront windows, vacant shops and warehouses, rows of identical houses, lonely ﬁgures walking the barren streets, distant enough to seem aloof.

Bio
Niko J. Kallianiotis is a Pennsylvania-based educator and photographer. He was born in Greece, where he spent his formative years, but has lived in the United States for all his adulthood. Because of his hybrid background, he views the world and his surrounding environs from two different perspectives, both culturally and socially. With photography he is attempting to comment on his cultural dichotomy: the decision on the use of colour, light, and form is of ultimate importance and plays a significant role in his representing himself.
He started his career as a newspaper photographer, first as a freelancer at The Times Leader in Wilkes-Barre, Pennsylvania, and then as a staff photographer at The Coshocton Tribune in Coshocton, Ohio, and The Watertown Daily Times in Watertown, New York. He is currently teaching at Drexel University in Philadelphia, and he is a contributing photographer for The New York Times. 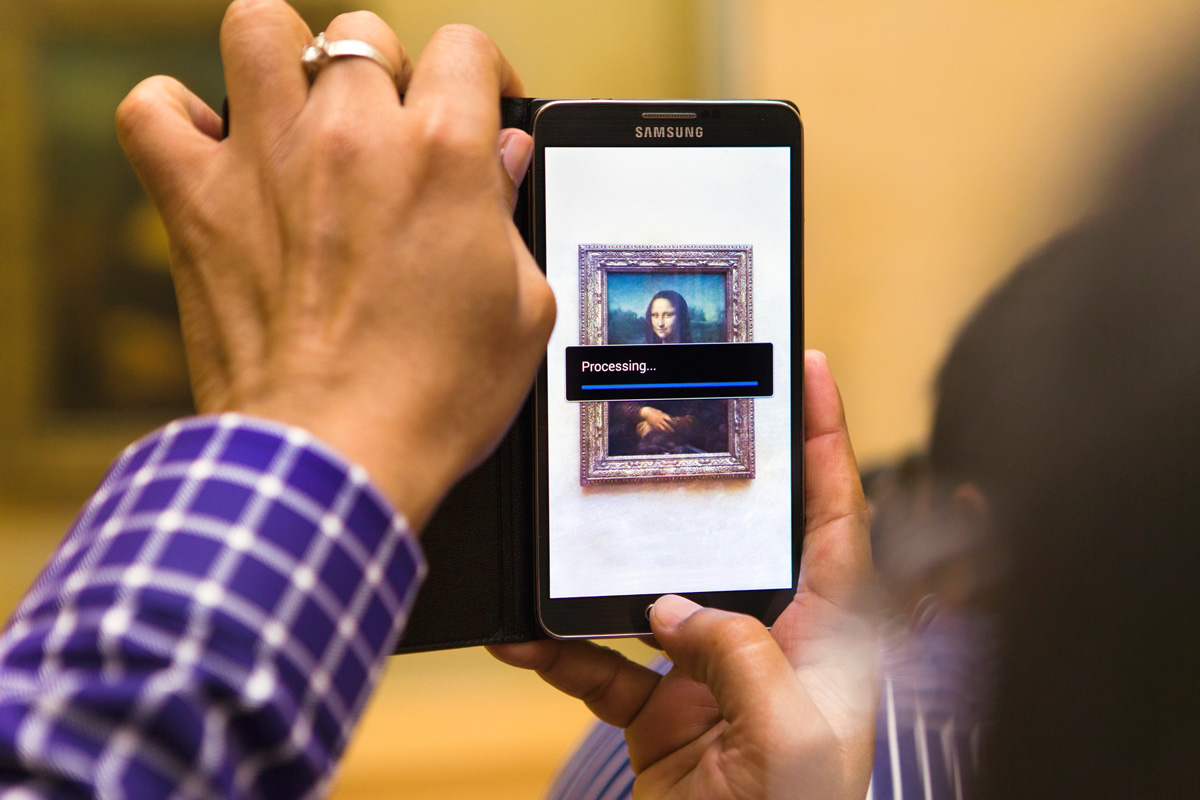 The series “Processing…” examines the connection between audience and artwork. The visitor becomes the central subject matter and the artwork a mere stage setting. Today, the selﬁe game is a binding protocol that generates stacks of photos. In these, the focus is no longer ﬁxed on the object of observation, but rather on the subject taking the picture. Photography serves as evidence that this object exists, simply because a certain person was there.
The project examines the Mona Lisa as the most recognisable icon of modern culture, a product of mass consumption and a place of worship that attracts million of visitors per year.

Bio
Nikola Mihov was born in Sofia in 1982. His works have been presented internationally in various exhibitions and festivals, including Les Rencontres d’Arles, La Nuit de la Photo in La Chaux-de-Fonds, and The Festival of Young European Photography Circulation(s) in Paris. He has received the Award of the Union of Bulgarian journalists and been nominated for “The Zooms” award of the Salon de la Photo in Paris. His first photobook, Forget Your Past (2012), has been listed among the best photobooks of the year by The British Journal of Photography, been reviewed in FOAM magazine and been nominated for the Deutsche Börse Photography Prize. His second book, Hello and Welcome to Paris (2016), was shortlisted for the 2016 Kassel Dummy Award at the PhotobookFestival in Kassel. Nikola is a co-founder of the platform for the contemporary Bulgarian photography Bulgarian Photography Now and served as a guest curator of the first edition of the Sofia Art Book Fair in 2017. 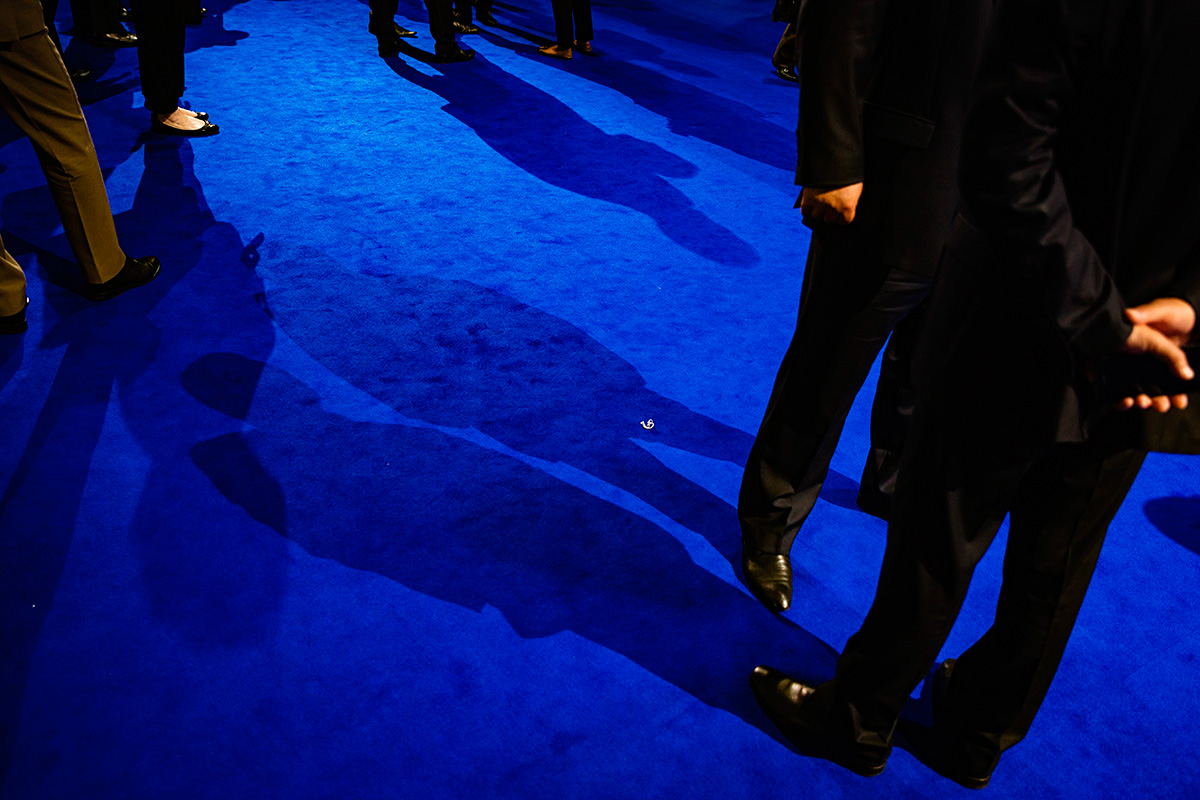 Mikhail Palinchak has been working for a number of years as an accredited photojournalist at the oﬃce of the President of Ukraine. Following the President in oﬃcial missions, at the summits of International Organizations such as NATO, the EU or the United Nations, he has oﬅen found himself in the premises where important decisions are made regarding the peace, future and prosperity of small and big countries.
At the sidelines of these formal missions, he started to observe the surrounding environment more carefully. He was impressed with the degree to which these working spaces, though suﬃciently organised, seem to be ephemeral, characterised by an austere aesthetic of functionality, being contemporary but in a rather indiﬀerent, bureaucratic way that reminds of a mass furniture department store. He started taking pictures of the always-renovated and oﬅen shortlived infrastructures, with their minimal decoration and complete lack of natural light; the waiting rooms, the segmented bodies of the oﬃcials with their creaseless suits, the halfclosed doors, the shadows of people hinting at the backstage stories, away from the ﬂashes of formal handshakes and press conferences, the ﬂags and indoor plants, and the staged arrangement of the oﬃcial photograph with the names of each country laid on the carpet.

Bio
Mikhail Palinchak was born in 1985 in Uzhgorod, Ukraine into a photographic family. He first became involved with photography in 2008 and since 2012 he is a member of the Ukrainian Photographic Alternative (UPHA). He has participated in numerous exhibitions and shows in Ukraine, Italy, Great Britain, Serbia, Belgium, France, Germany, FYROM, Slovenia, the Netherlands, the USA, Poland, Georgia and Russia. His main focus of interest is the documentary essence of photography. He lives and works in Kyiv, Ukraine. 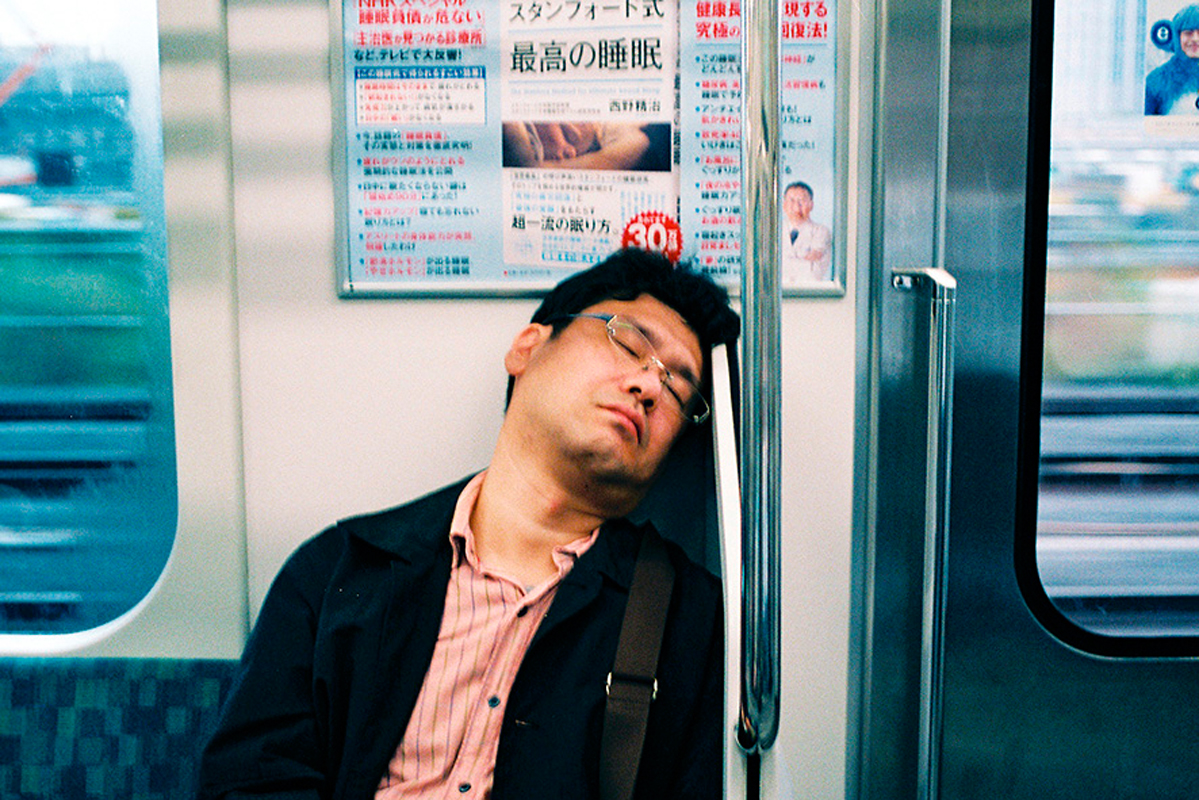 Christopher Charles’ Banjawarn, which became an exhibition by Jack Pam, takes its name from a remote sheep station on the edge of the Great Victoria Desert in Western Australia, purchased by Aum Shinrikyo in 1993. Just months after the end of their occupation of Banjawarn Station in 1995, the cult released the nerve agent Sarin on the Tokyo subway, killing 12 people and injuring over 4,000 others. Banjawarn station is among the largest pastoral properties on the Australian continent. At over 400,000 hectares, it is more than double the size of metropolitan Tokyo, an urban area containing over 9 million people. In contrast, the state of Western Australia is the second largest country subdivision in the world, yet it has a population of only 2.5 million people, almost exclusively distributed over a small south-western corner.

Bio
Christopher Charles (AU)
Christopher Charles was born in Perth in 1981. He spent his childhood in the Western Australian Wheatbelt and on the Pacific North-West Coast of the United States and Canada. After a brief return to Perth in his late teens, Charles travelled the world until his mid-20s. During this prolonged, formative period, he developed his skills as a mark-maker, installation artist, filmmaker and documentarian. From 2007 to 2017, Charles lived and worked in Berlin, where his first gallery exhibition Rite On was held at West Ends IPMB contemporary art gallery in 2013. Charles also has exhibited in London and Moscow. His work is concerned with “the nature of things”, the tendency for objects, processes and information to be reconfigured and degraded through constant repetition and re-interpretation over time. He explores the construction of identity and community through the act of recording and transferring knowledge, memory and history through practices that include ritualism, idolatry and fetishism.

Jack Pam
Jack Pam is a nomadic independent curator, writer and researcher. His work spans a range of diverse creative projects including a documentary for ABC TV (Photography Hijacked), a travelling bookshop dedicated to the handmade (Tennis Club Bookshop) and a major visual arts festival broadcast on TV and online (Ikono on air Festival). Attracted to the act of the process, Pam is often inquiring into the bordering fields of science, history and creativity. Jack Pam’s work has often focused on the two mediums of contemporary photography and video. This fascination is borne out of an interest in contemporary visual languages that are shared by artists and the communicating global populous. He is constantly motivated to pursue projects that harness new and often ambitious methods of storytelling and novel ways for content delivery while concurrently giving artists the space and opportunity to define and redefine their own creative practice. 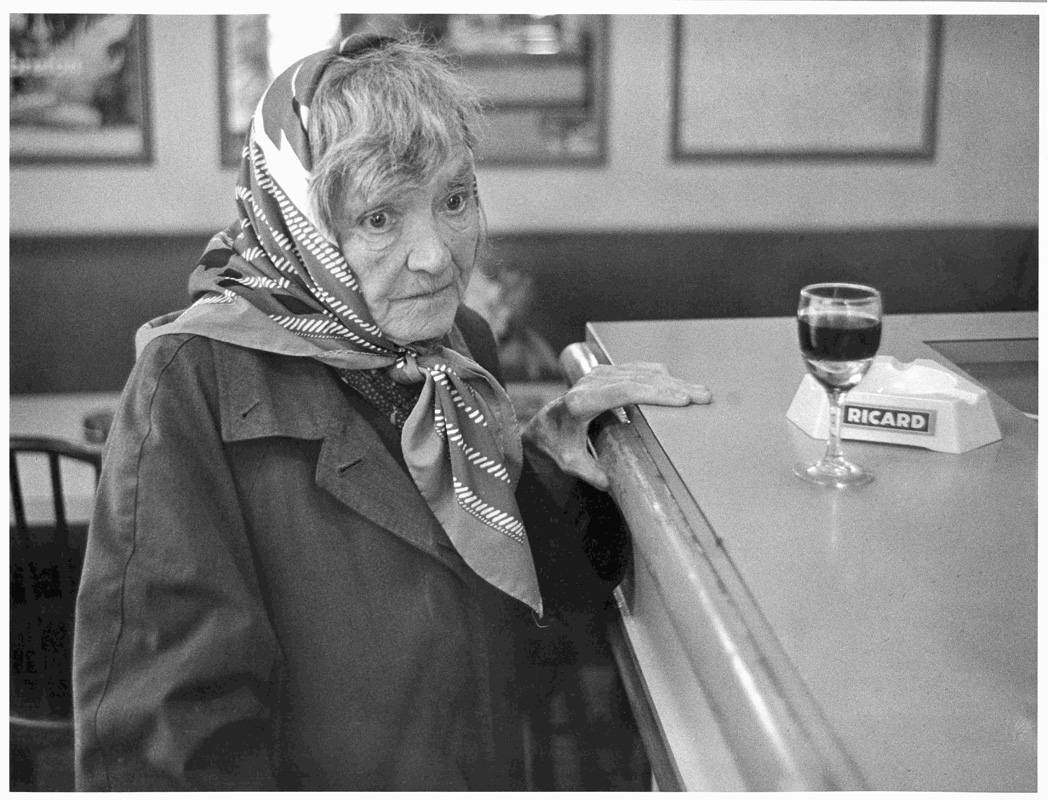 Bio
He was born in Vsetín, Czechoslovakia (today Czech Republic) in 1946. In 1967 he graduated from the faculty of Visual Arts Teaching of the Palacky University and realised his ﬁrst solo show. From 1972 he depicted life in the Czech province, focusing on portraits and the Roma. From 1974 to 1977, he studied at the School of Art Photography in Brno. In 1982 he participated (as the only photographer) in the forbidden visual artists exhibition that took place in a tennis court in Prague. His photographs drew the attention of the Secret Service, so he was detained and sentenced to ten months imprisonment on probation, while he was also forbidden to teach. Aﬅer the Velvet Revolution and the change of the regime in 1989, he was rehabilitated. From 1994 onwards he is a freelance photographer. He has taught at the Film and TV School (FAMU) in Prague and at the School of Fine Arts in Bratislava, while, from 1991 to today, he teaches at the Institute of Creative Photography of the Silesian University. He has participated in a large number of solo and group shows, as well as publications. Many of his works are part of important museum and gallery collections, including the MoMA, New York, the National Gallery in Washington, DC, the Museum of Decorative Arts in Prague and the Moravia Gallery in Brno.

Your ticket for the: Six exhibitions of Thessaloniki PhotoBiennale 2018 at MMCA