Contemporary photography at the Thessaloniki PhotoBiennale 2018 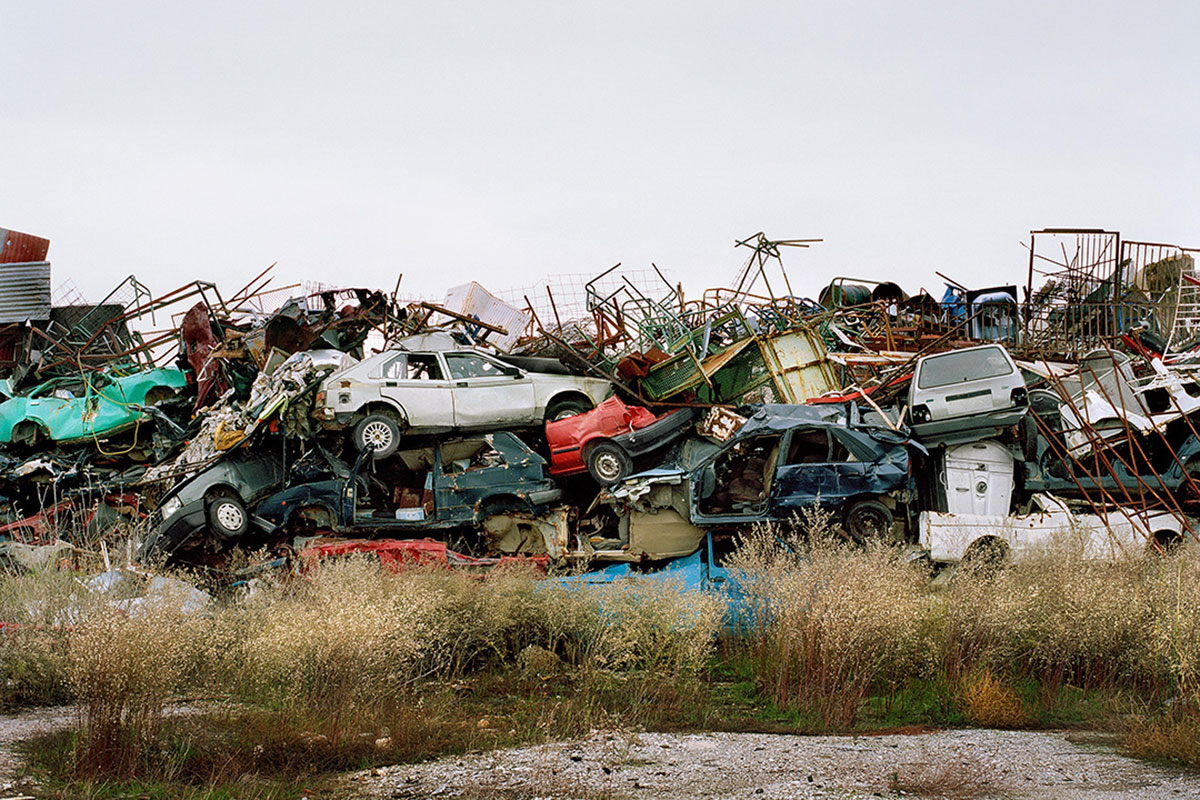 Renowned and rising photographers from Greece and abroad “unfold” their contemporary point of view at the Thessaloniki PhotoBiennale 2018 exhibitions, organised by the Thessaloniki Museum of Photography.

The suburban landscape of Thessaloniki “comes to life” through the lens of Yiannis Pantelidis in his solo exhibition Nothing personal, which opens on Friday, September 21, at 20:00, at Ro Art Space.
The perimeter around Thessaloniki patrolled by Pantelidis constitutes an open pool where man registers traces, establishes activities, corrupts forms, exiles excesses or wastes. There he comes across saltworks and photovoltaic parks, anonymous graves and junk yards, shopping malls and petrol tanks, greenhouses and makeshift landfills, in a few words whatever the city vomits where its lining becomes frayed. In his wanderings, he locates paths engraved but seemingly unwalked, forms enigmatically balancing between the vague and the specific, the random and the intentional. Pantelidis reverently obeys the rules of non-involvement that an urbanite inherently brings to nature, and reads every ephemeral sign of the landscape as an open text, like the clothes hanging from an almost invisible wire or the humble bouquet perched on a fence pole. And he walks for hours and hours seeking nothing personal. However, when nothing seems personal, such can everything potentially become.

Tania Franco Klein | “Our life in the shadows”

Our life in the shadows | Tania Franco Klein (MX)

Tania Franco Klein’s project is inﬂuenced by the pursuit of the American Dream lifestyle and contemporary practices such as leisure, consumption, media overstimulation, eternal youth, and the psychological sequels they generate in our everyday private life. The exhibition Our life in the shadows seeks to evoke a mood of isolation, desperation, vanishing and anxiety, through fragmented images that exist both in a ﬁctional way and a real one.

Bio
Tania Franco Klein (b. 1990) started her photography praxis while studying for a BA in Architecture in Mexico City, which led her to pursue her Master’s in Photography at the University of the Arts London.
Her work is highly influenced by her fascination with social behaviour and contemporary practices such as leisure, consumption, media overstimulation, emotional disconnection, eternal youth, the American dream in the Western world and the psychological sequels they generate in our everyday life.
Franco Klein’s work has been exhibited in London, Budapest, Mexico, Spain, France, Germany, New York, Vermont, Photo Basel, and during the Lucie Foundation Los Angeles Month of Photography 2017. It has been showcased and reviewed by the Aperture Foundation, The British Journal of Photography, Fisheye, i-D and Der Greif, among others. She has won a Sony World Photography Award, and been nominated for the LensCulture Exposure Award and the Felix Schoeller Photo Award, among others. 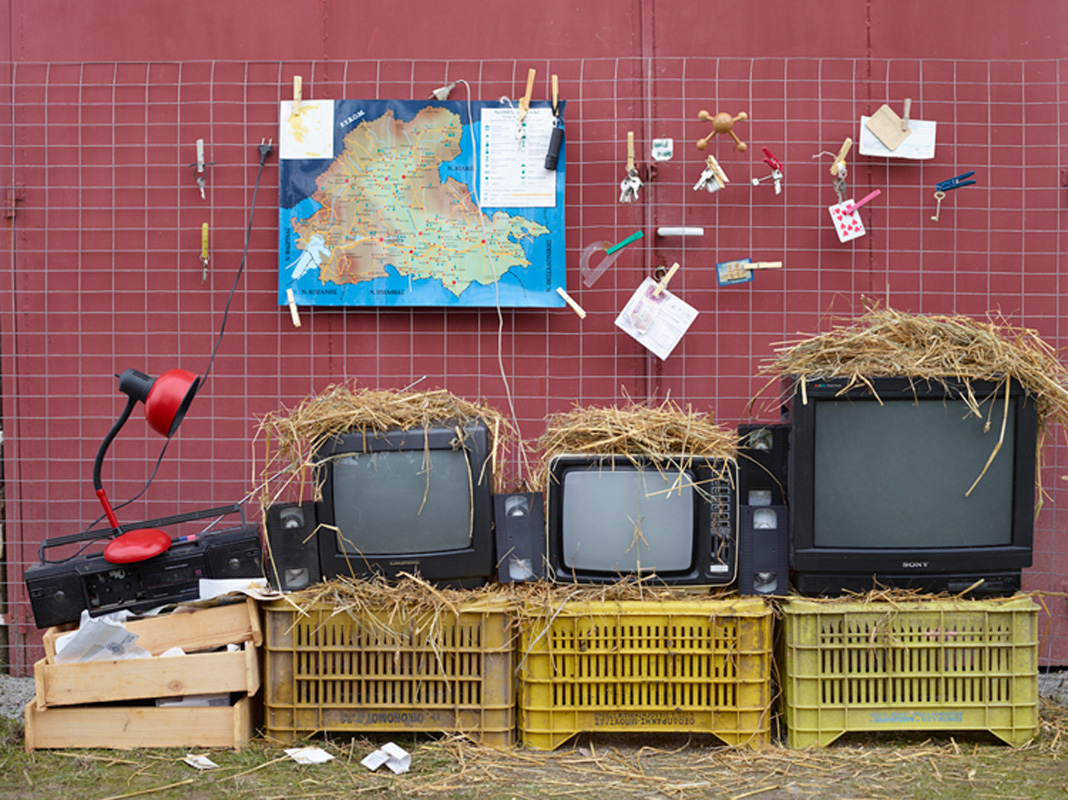 Petros Efstathiadis, Monitors, 2014 From the series Prisons. Courtesy of the artist and CAN (Christina Androulidaki Gallery)

Using his personal experience as a fertile raw material, Petros Efstathiadis returns regularly to his village, in the prefecture of Pella, in order to set up ephemeral, seemingly casual, installations made with commonplace materials refer to a vaguely Greek, perhaps more broadly Balkan, countryside whose inhabitants oﬅen come up with solutions with everything available. Efstathiadis’ works criticise the urban spirit and they propose clear simplicity as a deeper substance of art and life, which we incomprehensibly insist on ignoring.

Bio
Petros Efstathiadis graduated from the University for the Creative Arts, Farnham and lives in his native country, Greece. He was awarded the prestigious Prix HSBC in 2018 and is currently presenting the solo show Gold Rush at the CAN Gallery, Athens. This year Efstathiadis also presented photographs, videos, and a site-specific installation in the exhibition The Presence of Absence, or the Catastrophe Theory at NiMAC, Nicosia, Cyprus, which had previously appeared at Izolyatsia, Kiev, Ukraine, in 2016. In 2017 he exhibited works at the Wallach Art Gallery, Columbia University, New York; Foto Forum Galerie, Bolzano, Italy; and Plovdiv Photography Festival, Bulgaria. In 2016 his work appeared in The Equilibrists project, curated by the New Museum of New York, at the Benaki Museum, Athens. He has also participated in shows at the Serlachius Museum, Finland; Circulation(s) Photography Festival, Paris; and Athens Photo Festival, Xippas Gallery, and House of Cyprus, all in Athens. His work has been published in Wallpaper*, Monocle, the Guardian, and Jeu de Paume. Efstathiadis won the grand prize at the Hyères Festival in 2013.

In 1967 Yiannis Stylianou photographed the parade of the 25th of March National Holiday (Greek War of Independence) in Thessaloniki, outrageously ignoring the oﬃcial event, and turning instead his lens to the restlessness of the crowd, exactly one month before the military coup broke out on 21 April. Half a century later, George Georgiou photographed parades in various cities of the USA, in the shadow of the Trump presidential campaign, keeping a similarly strict distance from the event and producing a series of works titled “In the company of strangers: Americans Parade” (2016-17). The photographers’ black and white photographs create a dense, multilayered narrative, without a visible incident, having everyday people as the involuntary protagonists.

Bio
Yiannis Stylianou (GR)
Yiannis Stylianou (1941-1996) was born and lived in Thessaloniki, Greece. He studied at the Law School of the Aristotle University of Thessaloniki and worked in the family-owned shoe manufacturing company called “Alissida”. He was essentially self-taught in photography which he used as an expressive medium from 1966 to 1969. In this short period of time he engaged in formalist as well as street photography in the humanistic spirit of that period. His archive has been donated by his family to the Thessaloniki Museum of Photography which organised his retrospective in 2002 titled Yiannis Stylianou: Lucid Vision, Νoble Paradox.

George Georgiou (UK)
George Georgiou was born in London in 1961. He received a BA (Honors) in photography, film and video arts from the Polytechnic of Central London (University of Westminster) in 1987. In 1999 he joined Panos Pictures in London and began to work exclusively on his own long-term projects. He has photographed extensively in the Balkans, Eastern Europe and Turkey, living and working in Serbia, Greece and Turkey from 1999 to 2009. Work from this period resulted in the acclaimed book Fault Lines/Turkey/East/West (2010). Fault Lines has been exhibited many times internationally and was included in the prestigious New Photography 2011 exhibition at the MoMA, New York. His book Last Stop, photographed across London, was self-published in 2015. Several institutions and private collectors, including the MoMA, NY and the Elton John collection, collect Georgiou’s work.

Your ticket for the: Contemporary photography at the Thessaloniki PhotoBiennale 2018

Contemporary photography at the Thessaloniki PhotoBiennale 2018