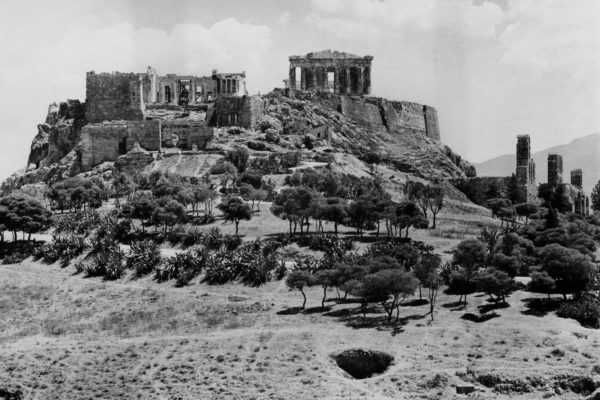 François-Frédéric Boissonnas (Geneva 1858 – 1946), known as Fred Boissonnas, was French-Swiss photographer, known for his photographic technique, but also his extensive photography of the Greek area for about thirty years, along with the companion of Daniel Baud-Bovy, dean of the School of Fine Arts in Geneva. His work, as regards Greece, is generally considered groundbreaking and crucial for the development of Greek photography in the 20th century.

The photographs in this exhibition are part of the Trikoglou Collection, which belongs to the Central Library of the Aristotle University of Thessaloniki and includes over 12,000 books and around 2,000 works of art. Ioannis Trikoglou, a Greek merchant from Cairo, was an avid collector with a special interest in Greece and Greek history. It is not very well known that he was also an amateur photographer. In fact, in 1937 he had exhibited on Parnassos his photographs from Egypt and Greece. These very interesting photos, as well as the catalog of this exhibition are preserved today in the Central Library of AUTh. His acquaintance with Boissonnas's work had begun very early. […] In 1929, Trikoglou helped finance the magnificent edition of Boissonnas' book Egypte with photographs of Egyptian monuments as well as modern life and technological achievements. The publication was dedicated to King Fouad of Egypt who had also proposed its creation - unfortunately it has not been reprinted since. In 1933 the photographer went back to Egypt on Mount Sinai to create a second edition on the route of the Israelites as recorded in the biblical "Exodus", which was never published. During this trip he wrote his impressions in a diary which is kept in the Trikoglou Collection section. Parts of the diary, are presented in this exhibition, for the first time.

More specifically, the exhibition presents a selection of photographic material and texts of the –appointed by Ioannis Trikoglou- Boissonnas tours in Egypt, mainland Greece, the Ionian Islands, as well as the emblematic photographic imprint of the Parthenon album. These photographs should be seen in all their multiplicity: on the one hand, aesthetically; as depictions of a unique and rare approach to the Egyptian and Greek landscape and Greek history, and on the other hand, sociologically; as capturing a land’s sense and identity, what we today coonsider as "national identity", which was –back then- being shaped via its national and geographical reflections.

Your ticket for the: "On Odysseus' raft" | Fred Boissonnas (FR)