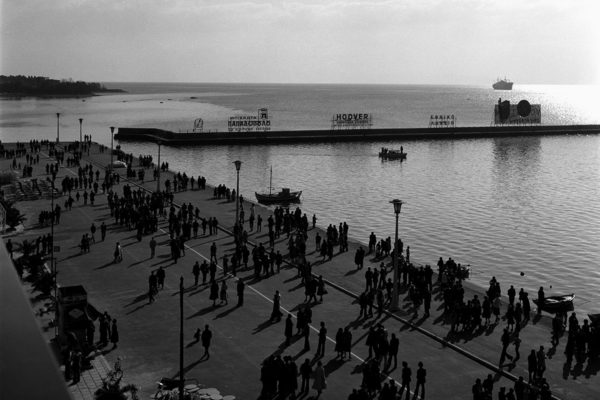 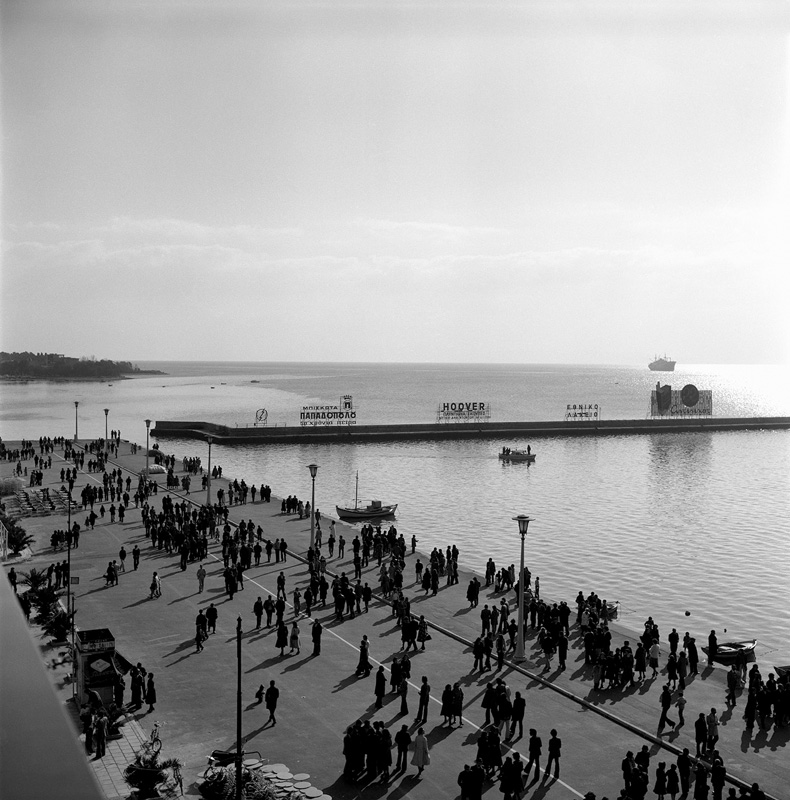 Dimitris Letsios was born at Anakassia, Volos on 12 December 1910 and died in Volos on 17 January 2008. From an early age, he worked at the family bakery in Iolkou Street. His relationship with photography began in 1934. The photographer Babis Basdekis initiated him into the secrets of photography; nevertheless, he was largely self-taught. During the German occupation, he became the Volos president of the United Panhellenic Organisation of Youth (EPON), a Greek resistance organisation, and organised partisan art events in the mountains of the Pelion region. After the December 1944 events, he was arrested and exiled. He founded the Volos branch of the Greek Photographic Society (EFE) in 1956 and he also served as president of the Volos Film Club. His lifelong companion Athena Tzimerou was the key material and spiritual supporter for creating his extensive and varied photographic archive. His images have been featured in a large number of exhibitions in Volos and Thessaly, in EFE exhibitions, and in the retrospective exhibition dedicated to him at the Thessaloniki Museum of Photography in 2005, which subsequently travelled to Athens, Florina, Xanthi and Volos. There have also been released four books and a 30min documentary film dedicated to Letsios. His work celebrates the Greek countryside, with an emphasis on Pelion and the Thessalian plain, documenting almost all aspects of folk culture. Portraits and landscapes, everyday life scenes and snapshots compose an authentic panorama of postwar Greece which includes urban living, mainly in the city of Volos, making Letsios one of the most important figures in postwar Greek photography. The Dimitris Letsios archive is part of the permanent collection of the Thessaloniki Museum of Photography.

THE FACE OF THE CITY

Dimitris Letsios’ body of work now enjoys a well-deserved position in the history of post-war Greek photography. If, however, a substantial part of his oeuvre is identiﬁed with his endless excursions around Pelion and the greater Thessalian hinterland, how has this important artist portrayed his homeland? Upon examining Letsios’ material related to the city of Volos, the ﬁrst observation to be made is that, as far as his subject matter is concerned, his material maintains the same overall focus: street scenes, snapshots, everyday characters, landscapes -urban ones this time.

Letsios’ work in Volos is distinctly focused on simple breadwinners, lower-class ﬁgures, children wandering in the streets. These become the anonymous protagonists of his photographs. His consistently leﬅ-wing yet nonpartisan stance informs his gaze, focusing here on common people and labourers in a straightforward, oﬅen poetic manner. There certainly are carefree scenes, too, for instance the oblique look at the local Philharmonic, the performance at the ancient theatre of Demetrias, the snapshot of the festive atmosphere in the early 1960s carnival.

The Volos material ultimately has all the characteristics of Letsios’ overall work: it ranks as pure photography, combining documentation with the pursuit of a personal style. Plain as the photographer’s life in general, it is marked by a simplicity that abhors pretentiousness. It largely favours the ﬁtting austerity of black and white tones, enlisting colour for formalist or abstract studies, occasioned by a road decorated with ﬂags, a dignitaries’ platform, political posters whose message is undermined when juxtaposed with the Athenaiki Taverna sign. If, aﬅer the War, we possess an authentic and variegated both stylistically and socially- documentary archive of rural life, reﬂecting a humanitarian spirit, thanks mainly to the quartet of Spyros Meletzis, Costas Balafas, Takis Tloupas and Dimitris Letsios, the body of work that captures city life, especially outside the capital city of Athens, during the same period is more limited. The transformation of cities through galloping urbanisation and silent westernisation mostly happened away from the accurate witness account of the camera. Letsios, however, traversed the body of the city in a quest to discover, beyond an elaborate staging, unseen aspects of the periods aﬅer the War and during the early years aﬅer the restoration of democracy in Volos -moments and scenes clearly distanced from the oﬃcial ideological facade of that time. Not surprisingly, transcending convenient personas, he ultimately revealed an elliptical, yet profoundly human, face of Volos.

Your ticket for the: A portrait of Volos | Dimitris Letsios (GR)